10 Most Beautiful Castles in Bulgaria

Due to the vital location of Bulgaria on the Asia-European crossroad, its history has inevitably been a string of battles and wars. Romans conquered Thracians, Bulgarians fought Byzantines, and Ottomans fended off western crusaders. These historical turbulences led to the construction of majestic fortresses and castles in Bulgaria.

Many of these fortresses served as protective city barriers and to this day, you can see the remains of the ancient town’s churches, workshops, and dwellings. Others were residencies to the country’s royalty and were constructed with extravagant architecture and ornate features.

To this day, these sites carry the history and spirit of the battles and events that took place thousands of years ago. Plenty of these locations are open to visitors year-round and make for an excellent day trip from Sofia, Plovdiv, or Varna.

The best-preserved ancient castle in Bulgaria is located on the north-western slopes of Stara Planina (Balkan Mountains). Close to the town of Belogradchik you will find the Belogradchik Fortress. The strategic location of this castle takes advantage of the incredible rock formations in the area. Namely, the Belogradchik Rocks, which are a significant natural site on their own.

This fortress was constructed during the time of the Roman Empire somewhere between the 1st and 3rd centuries when the empire was expanding its territory to the Balkan peninsula. After the fall of the Romans, the land was occupied by the Byzantine Empire before becoming part of the newly-established Bulgaria in the late 7th century. Bulgarian tsar Ivan Stratsimir expanded the existing construction in the 14th century, which established the Belogradchik Fortress as one of the most significant castles in the country at the time.

When can you visit the Belogradchik Fortress? The site is open for visitors every day of the year. Hours vary based on the season, but it opens every day at 9 AM and the earliest closure is 5 PM. The fare includes both the fortress and Belogradchik Rocks. Be sure to bring comfortable shoes as there are lots of steep stairs and climbs.

As of 2022, the price for an adult ticket is 6 BGN and 4 BGN for children. This location is quite popular and gets fairly crowded on weekends during the summer. We recommend visiting on a weekday during spring or autumn for the best weather and open views. 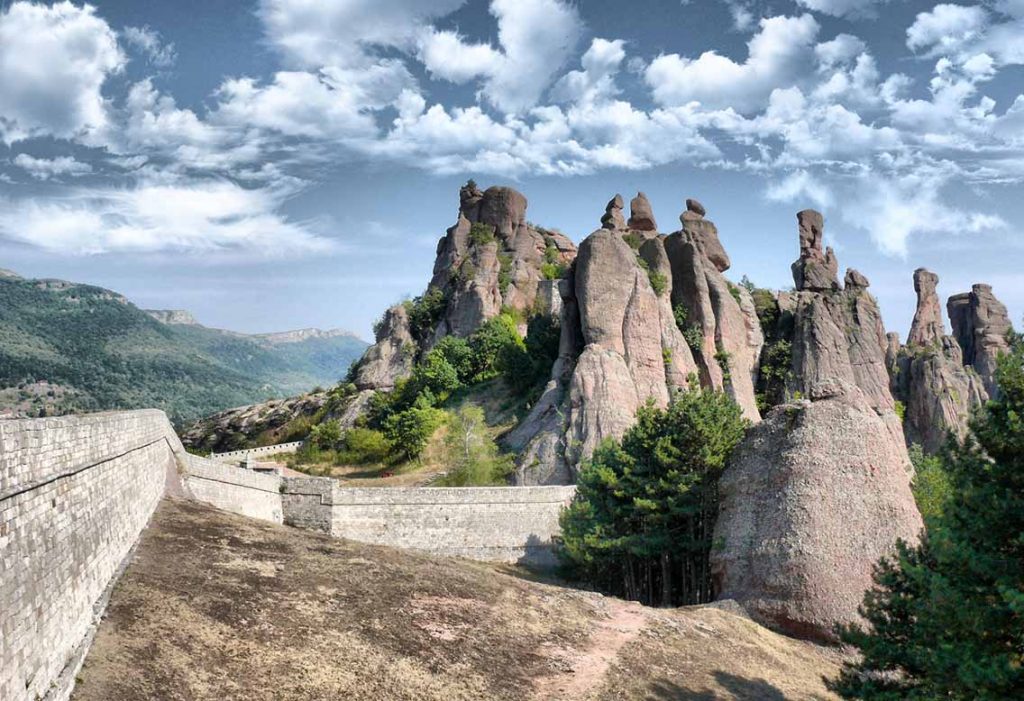 2. The medieval castle of Baba Vida in Vidin

Right on the Danube riverside, in the city of Vidin is a remarkable olden castle that has been preserved in its original form since its construction during the 10th century. Baba Vida was once the castle of a powerful boyar, the next-in-rank position after the ruler in medieval Slavic countries. The stronghold was used both for military defense and the home of the boyar’s family. Legend has it that the fortress is named after the boyar’s eldest daughter, Vida. When she heard the news of the Ottomans nearing, she ordered her people to build tall towers where she and the local villagers could hide. Thus, the fortress and towers began to carry the name of Baba (Grandma) Vida.

The intricate layout was built for durability and impeccable strength.  It features two layers of exterior walls, four main towers, and four smaller ones for surveillance and defense. Surrounding the fort is a moat, which used to fill up with water from the Danube for added protection. The cobblestone paths connecting the various sections of the Baba Vida fortress have lowered archways above them intended to make the interior of the fort even harder to reach.

Once seized by the Ottoman Empire, this fortress played a significant role in their rule of Bulgaria, serving as a weapon warehouse and a prison.  In the underground prison, you can see the gruesome weapons of torture and the gallows where many Bulgarians faced their death. You can walk through the fields once used for cannon and archery attacks and sense the grim history of this medieval castle.

Baba Vida fortress is on the outskirts of Vidin, quite easy to get to from the city itself. The prices of the tickets are 4 BGN for adults and 2 BGN for children. Or, you can visit for free on the last Thursday of every month, as well as on International Museum Day on May 18. 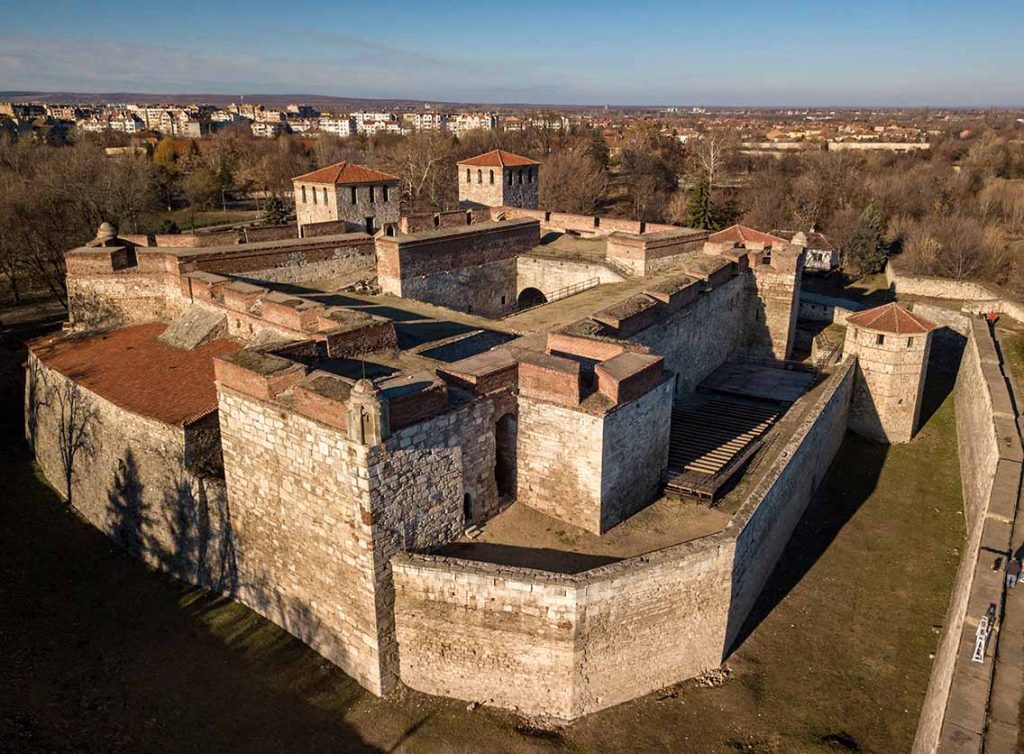 On a lone cliff ascending above the Asenitsa river, you’ll find  Asen’s Fortress, the gem of Asenovgrad. The medieval castle is perched just outside the cozy town amid the Bulgarian Rhodope Mountains.

Strategically built, the fortress is practically inaccessible, except for the steep road leading to its entrance. Throughout its turbulent history, the Assen Fortress has served six different civilizations, empires, and forces.

The earliest archaeological evidence dates from the time of the Thracians in the 5th century BC.  Later, the building was occupied by Romans before it fell under the successor Byzantine rule when the fortress was expanded by the ruler Justinian the Great. Years later, the Third and Fourth Crusades crossed this location before it finally became part of the Bulgarian country in 1230. Nonetheless, after it is seized by the Ottomans, the original fortress was destroyed.

The Mezek Fortress is claimed to be among the best-preserved Bulgarian medieval castles. It dates to the 11th century. Along with the discovery of adjacent Thracian tombs, it was studied by a team under archaeologist Bogdan Filov in 1931–1932. The castle has nine towers, five of which lie at the vulnerable south wall. The Mezek Fortress was built out of stone, with two decorative lines of bricks on the outside. It suffered some destruction around 1900 when stones from the fortress were used for the construction of Ottoman barracks in Svilengrad. 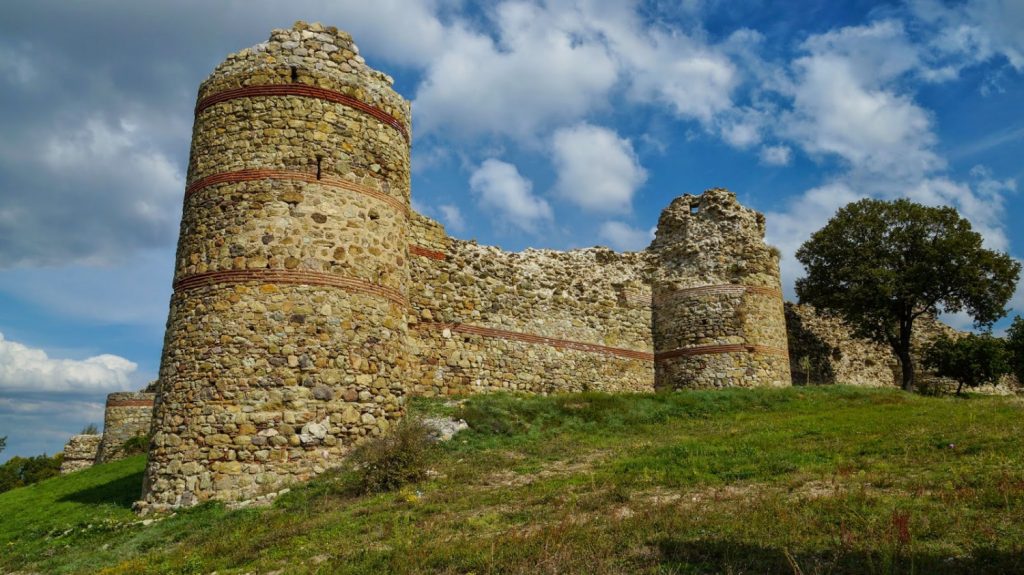 Of course, we had to feature the Tsarevets fortress on this list. The grandeur castle complex is both an architectural treasure, and an open-air museum with centuries of history. It’s located in the “City of the Tsars” – Veliko Tarnovo.

Tsarevets is a medieval stronghold located on a hill with the same name in Veliko Tarnovo in northern Bulgaria. Tsarevets is 206 metres (676 ft) above sea level. It served as the Second Bulgarian Empire’s primary fortress and strongest bulwark from 1185 to 1393, housing the royal and the patriarchal palaces. It has three entrances. The main entrance is located on the easternmost side of the hill. The castle complex is located in the centre, surrounded by an internal stone wall, two battle towers, and two entrances – north and south. It consists of a throne hall, castle church and the king’s chamber. The restoration of the fortress Tsarevets began in 1930 and was completed in 1981 in honor of the 1300th anniversary of the establishment of the Bulgarian state.

During the Middle Ages Ovech was a key centre of the First Bulgarian Empire with an important monastery at the modern village of Ravna and a major scriptorium of the Preslav Literary School. During the Uprising of Ivaylo, the rebel leader and subsequently emperor of Bulgaria Ivaylo defeated a 10,000-strong Byzantine army near the city in 1279. During the Second Bulgarian Empire Ovech was the seat of a metropolitan in the 14th century. Ovech was captured by the Ottomans in 1388 after a long siege.

Тhe Euxinograd Residence is located at a distance of 8 kilometers north of Varna and lies on a 3-kilometer coastline in close proximity to the resort of St. Constantine and Helena. The complex used to be a royal summer residence for the monarchs who ruled Bulgaria after the liberation of the country from the Ottoman Dominion (1878) – Alexander Battenberg, Ferdinand, and Boris the 3rd.

Prince Battenberg visited Varna in 1880 and he was welcomed at the monastery “St. Dimitar”, which was situated at the same place, where now the residence stands. The monarch liked the local nature so much, that two years later the Varna municipality bestowed him the monastery and its adjoining lands. 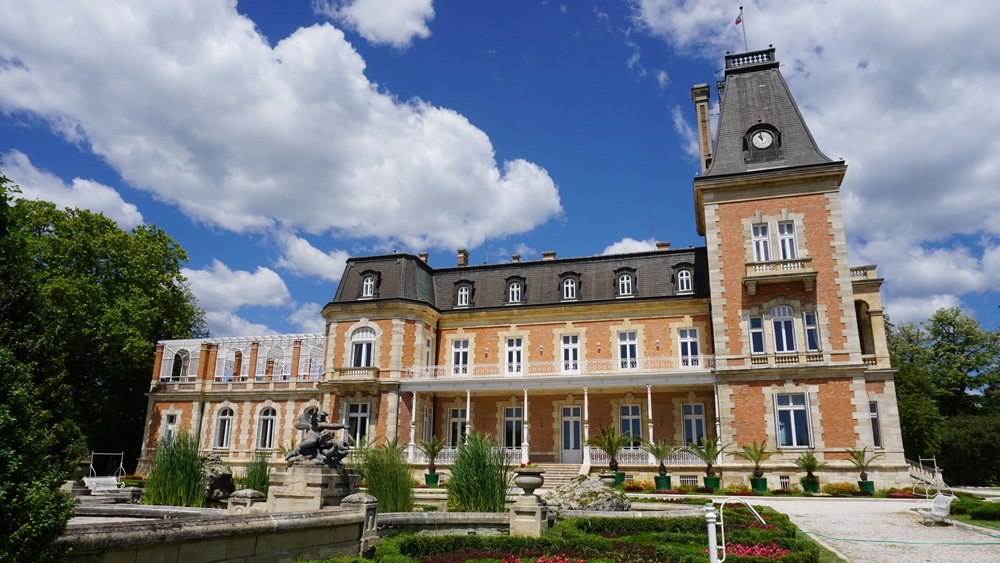 The castle in Vrana is a former royal palace, located on the outskirts of Sofia, the capital of Bulgaria. Today, it’s the official residence of Tsar Simeon II of Bulgaria and his wife Tsaritsa (queen) Margarita. While the Royal Palace in the centre of Sofia (today the National Art Gallery and National Ethnographic Museum) served representative purposes and the Euxinograd palace near Varna was a summer residence, Vrana was the palace where the royal family of Bulgaria spent most of their time. 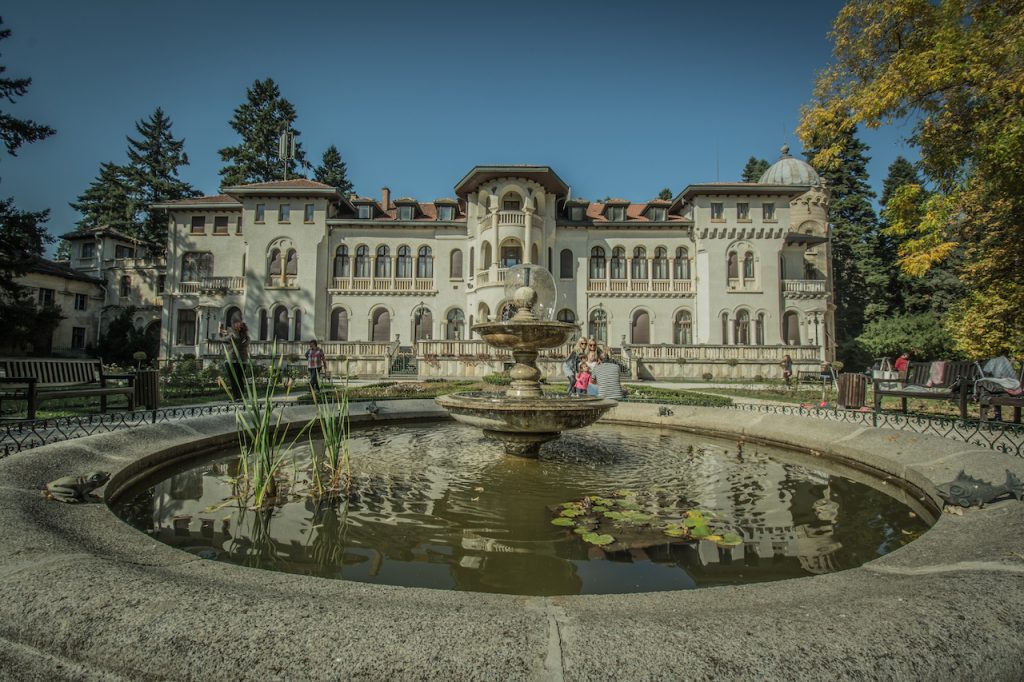 Tsarska Bistritsa is a former royal palace in southwestern Bulgaria, high in the Rila Mountains, just above the resort of Borovetsand near the banks of the Bistritsa River. Built between 1898 and 1914, it served as the hunting lodge of Tsar Ferdinand of Bulgaria and his son Boris III.

The hunting lodge was nationalized after 1945 when Bulgaria became a Communist state. The democratic changes of 1989 led to the controversial return of the palace to Simeon II, the last monarch of Bulgaria and afterwards a politician, in October 2002 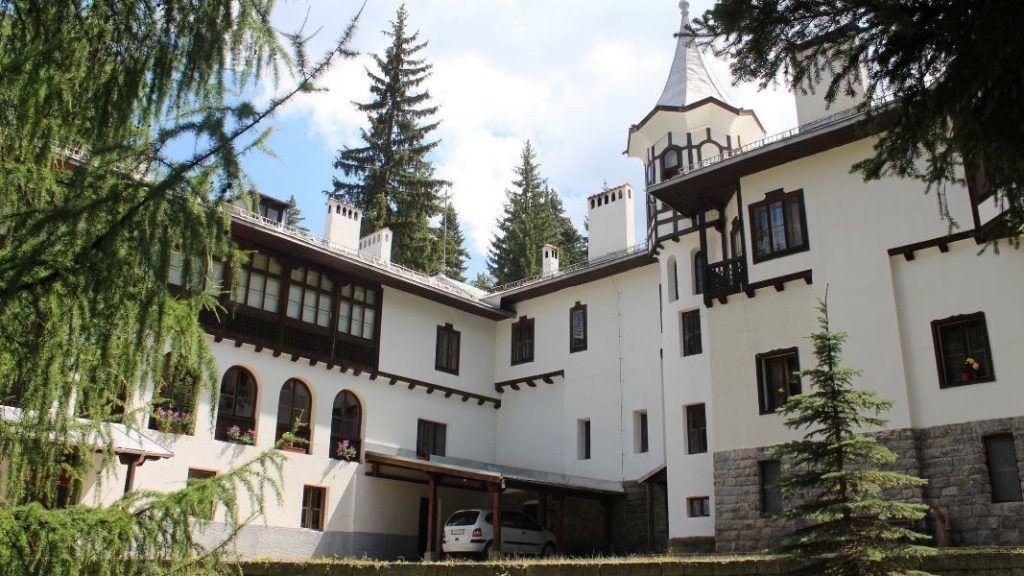 10. Botanical gardens and castle of Balchik

The Balchik Palace is a palace in the Bulgarian Black Seatown and resort of Balchik in Southern Dobruja. The official name of the palace was the Quiet Nest Palace. It was constructed between 1926 and 1937, during the Romanian control of the region, for the needs of Queen Marie of Romania. The palace complex consists of a number of residential villas, a smoking hall, a wine cellar, a power station, a monastery, a holy spring, a chapel and many other buildings, as well as most notably a park that is today a state-run botanical garden. Balchik Palace is 17 metres (56 ft) above sea level. 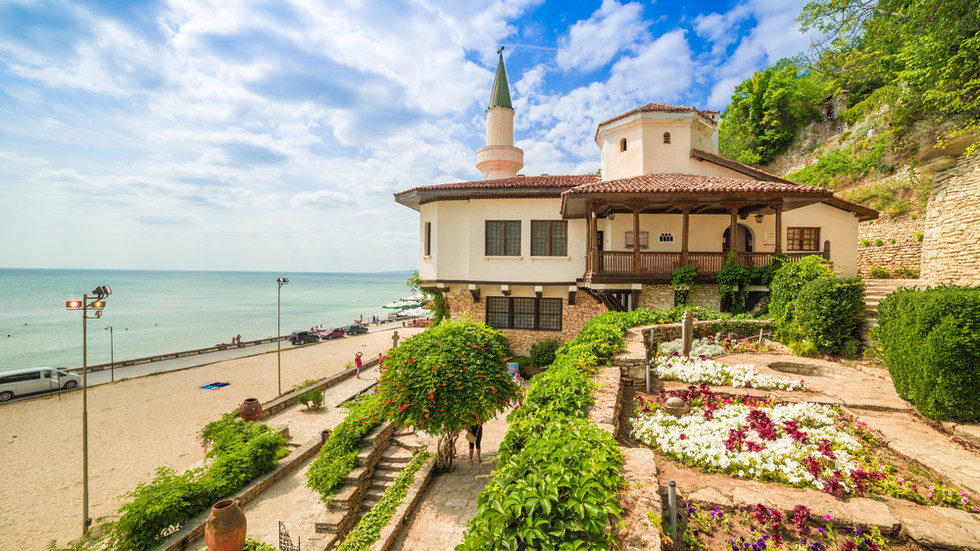